The FCC Can Go Fuck Themselves

Posted by Che Shabazz on June 26, 2014 in Uncategorized |No Comments

Let’s forget for a second that the FCC is at the head of the charge to end net neutrality. Let’s forget that net neutrality will not only be the end of the internet as we know it, it will be the end of fair business on the biggest medium for start-ups since they found out there was shiny yellow shit in the Klondike. Let’s all disregard for just a moment, that the FCC is in large part responsible for the ISP’s new(ish) six strikes rule. Which professes to give more power to the artists by regulating illegal sharing of their media but which actually gives the RIAA and MPAA more power and lines the pockets of the already far too rich studios and record labels. Let’s also forget that the FCC declined to investigate AT&T, BellSouth, and Verizon for assisting the NSA in invading your privacy. Let’s all forget that the FCC is the reason you overpay for cable, internet, and phone service. Let’s all forget that while the FCC in name seems an innocuous enough agency of the government it is one of the most mismanaged and nefarious organizations, whose incompetence and playacting toward the huge monopolies that support them has allowed those industrial giants to take over almost every aspect of your life. Let’s forget all that for a second and talk about the real reason the FCC should go fuck themselves.

The FCC, or the Federal Collection of Cunts. No, hold on, that can’t be right. The FCC, or the Fucking Commission of Cassholes. Something about that doesn’t sound right either. Oh, no I’ve got it. The FCC, or the Full-of-shit Collective-for-preserving Cuteness. Fuck it. I’m sure that was close enough. The real point is that this agency, the FCC, is primarily in charge of fining people and organizations for cursing and screwing on the television or radio. Or at least for the sake of this piece that is their primary responsibility. I considered lumping in organizations with the worth “Mothers” in their name into this diatribe but there is probably one out there that actually does some good for society; but you can rest assured that Mothers for Ruining Everyone’s Fun and A Million Christian Mothers Against Things we Don’t Understand can go fuck themselves too. The two of you that just Googled those names should be ashamed of yourselves.

Why can all these people that profess to serve the good of the public go fuck themselves? For one simple reason, they chose to continue to live in the 1940s. The 1940s seems like a great time really—I mean if you were a white man that is—then again, if you’re a white man every time is great for you. But still the 1940s gave us Citizen Kane, The Maltese Falcon, Fantasia, Casablanca, The Great Dictator, it gave us the preliminary years of Kurosawa—my jesus. The 1940s gave us Son House, John Lee Hooker, and Ella Fitzgerald. The decade birthed some of the greatest minds and people in human history: Muhammad Ali, Jimi Hendrix, Robert De Niro, Aretha Franklin, my father—just to name a few. The 1940s were super, but they were also 65 years ago at this point, it might just be time to pretend like we live in 2014. In 2014 it’s become so easy to find vulgarity, pornography, and general misconduct that some people think we’ve become a godless desensitized nation riding together on a raft to hell. I can confirm we are riding the raft to hell, because I’m driving it but that doesn’t change the fact that it’s absurd to try and dictate the way other people live based on outmoded and unsupported beliefs.

I realize you have just reached paragraph four and probably still have no idea what is going on. Admittedly that is entirely my fault and not yours. I’m just sort of writing whatever falls out of my face on an issue that I hold quite dear. But let me try and ground you in some reality before I move forward with my bullshittery. Society has this puritan approach to the media we digest, which prevents curse words and violence and countless other strange rules to be enforced on the artists of our generation. This seems like a harmless enough practice, and don’t fret I’m not about to make the foolish mistake of comparing the attempt to censor vulgarity from sensitive ears to artistic repression—they’re not the same, at all. But this is at best irritating, and at worst the primary reason for all the crap that floods our airwaves today. Along with being the people I blame for the state of the radio today and primetime network television, the FCC also levees fines on people who infringe on their rules hitting the networks and stations with hefty fines for things they find obscene.

Of course, as with anything the government does the FCC fines are enforced with little consistency. You can get fined an exorbitant amount of money for saying he word “fuck” because it both “evokes a coarse image of a sexual act” in children’s minds and also “expends their vocabulary”. We’ll just skip over the glaring oxymoron in that ruling and move right on to the fact that you can’t say fuck but this shit comes on your TV at like 9PM: 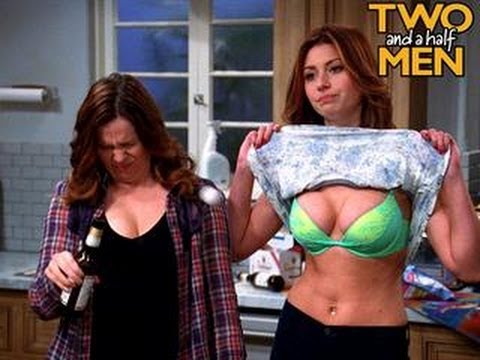 I like boobs as much as the next person with a pulse, but how is this better than the word “fuck”?

Now I take this very personally because fuck is my favorite word, by far, it’s just so versatile and succinct and beautiful. It’s the minimalist design of words. And we all know minimalist graphic design is just better.

I mean look at that absolute mess on the right.  Fuck; that Snatch poster is beautiful though.

It is true that I would like to be able to watch a show on CBS, NBC, or even cable (which is allowed to say “shit” now?) and see grown ass people talk like grown ass people. Honestly the word “freaking” is to conversation what 555 is to phone numbers: just a glaring reminder that you’re watching a show, takes you right out of it. Yes I would like to hear Don Draper tell his new partners to go fuck themselves. Or see the 99th precinct talk like a bunch of cops and not a bunch of grade school teachers. Is it any wonder that 99% of the “Best” shows on TV are on channels where life looks like real life and not like watching your favorite movie on an airplane. All of that is not the real thorn in my side. The real thorn in my side is “clean” music.

Ugh, clean music, why do you exist? Edited music is basically the dick pics of auditory media: It’s fucking everywhere even though no one likes it, 99.9% of people listening to it are only doing it because someone else sprung it on them without asking—or they just have no other choice, the people that are responsible for the existence of clean music are exclusively assholes, and listening to it makes you feel empty and sad inside. If I was a rapper, which I am very much not, the first stipulation in my contract after “I get first pick of the bitties after shows then y’all niggas can fall in line” would be that my music would never be released in a clean version or else pose a breach of contract (yes, I most certainly did just say bitties). Why you may ask, actually probably not, because we’re 1222 words deep into this shit and you know how I feel already, but still I shall answer your hypothetical question. Because every word is chosen deliberately, same reason why we perform Shakespeare in old English today and not from the No Fear text. Word choice is drastically more important than your piece of mind when an artist is working. Imagine, listening to either of Danny Brown’s modern classics Old or XXX edited or even a more family-friendly rapper like Curren$y. It’s just not the same, in fact its garbage.  Listening to an edited piece of rap or watching a movie on JetBlue is like eating a cake without sugar, eggs, or milk: just a big ol’ pile of dry ass flour and baking soda. And you’re just sitting there eating it wonder why you keep taking bite after horrible, inedible bite when you could just go and get actual cake for free—on the internet. Lost the analogy a bit there at the end but you get the point.

This piece was motivated by the release of a pretty fantastic EP, The Shift. An EP released by Pro Era and distributed by Scion. No, no one has any idea why Scion thinks they can release music or why the fuck anyone would want music from Scion A/V. Because, for some reason Scion, the car company, is perfectly content with releasing many rap mixtapes—this is not the first to stir my ire—but they won’t, if it has cursing. Because everyone knows, Scions biggest customer base is children, and mothers of three, and not thirty year old guys with too much love for the Fast and Furious movies and forty year old assholes. Everyone knows that. And you can’t upset your base.

There are plenty of people who get offended by foul language. You’re expecting me to say fuck them, but I’m not going to. They are people too and their feelings matter. But let’s not pretend they are any more than feelings. The crucial word their being “feelings”. Feelings that could easily be avoided by simply avoiding rap music. I have some heart breaking news for four of you out there: if you don’t like foul language, you don’t like hip-hop. There’s tons of other genres out there for you but this one isn’t it. There are those who insist that foul language and sexually explicit material scars the youth of the world, besides being full of shit that statement is irrelevant. Children are not scared by curse words in fact all children who exist in society know what fuck means and have extensive experience with it. There are many arguably not-so extensive studies that show that children are not effected at all by foul language.  But again, if you would like your child not to hear explicit language do something about it. Why does your spawn get to dictate everyone else’s lives. In short, the FCC can go fuck themselves, and the Parents for an America Free of Fucks, LLC. can help them.